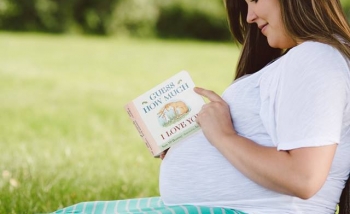 Three weeks until her due date and Katie was ready. In fact she was more then ready! The doctor said she was doing great, but as she wrote in her journal and counted the contractions and minutes in between, she was done being pregnant. Braxton Hicks again, she was sure. Katie secretly believed that little Shane was just crouched down in her uterus planning to stay inside her until he was at least two. He was determined, a lot like Katie.

Not even once had Katie wavered in her adoption plan, and in fact she and Nikki texted and spoke every single day. Nikki made her feel loved, included and safe. Their relationship had grown over these months and Katie knew one hundred percent they were Shane’s family. From the minute she had said to Nikki when they cut the gender cake, “ He is yours, he always has been”. God was directing this journey and Katie was at peace. She just wished her contractions were the real thing and not these false alarms which had been going on for weeks. She was going crazy!

Overall, Katie had experienced a healthy pregnancy but was ready to deliver Shane, this adorable little bundle of joy who loved to kick her in the ribs and bounce on her bladder. In those moments when she could feel him move she would call to Ryder who was entering the wonderful “ two’s” to see if he could feel Shane move too. Ryder was usually more interested in playing with his toys, getting into everything and just being a busy inquisitive toddler. Katie was also experiencing incredible intense craving for smells, like wet pavement and car exhausts. She discovered these were signs of low iron and in indeed this was her only medical issue during her entire pregnancy. No food cravings…. just weird smell cravings.

Katie attended every single birth mother support group that was offered. She looked forward to being with other women who understood, in a “judgement free zone”. To the other birth moms who had become her friends she could talk freely and know they understood. In fact the group this past week was the first where Katie really let her fears out, cried and let her friends help her work through her anxiety. Katie had shared she was worried, to the point of exhaustion, that because she had been so emotionally strong throughout her pregnancy that when she got to the hospital she would “lose her mind” and become an emotional wreck. Not that she wouldn’t place Shane, but that she would just fall apart completely. Her support group listened, let her cry and gave her hugs.They had all been there, each in their own way on their own adoption journey. Katie thanked God for the ability to be part of such a wonderful group of strong and resilient women and knew they would remain connected for many years.

Nikki’s contractions had stopped for a while so she grabbed her phone to call Nikki and share that it was a false alarm again. As Katie sat on floor, not sure how she would get up, she played with Ryder and listened to Nikki talk and play with Michael at the same time. They chatted about their children,and everyday happenings. Katie was always inspired by Nikki and Adam and how they lived their lives, putting their children first. One day that would be her…successful, happily married with a balance of life for her family. She knew in her heart that Shane would be loved endlessly and she and Ryder would still a part of his life forever. Katie was just ready to see Shane’s beautiful face and Nikki and Adam’s faces when they held him for the first time.