Unselfish Love, Our Adoption Journey Part 4: The Choice and The Connection 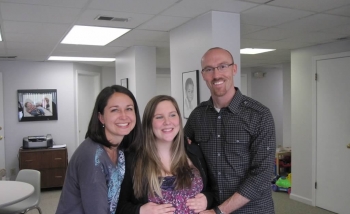 Nikki and Adam were excited as they loaded up their car for their hour long ride to meet Katie, the birth mother who had selected them earlier that week . Before Adam started the car, they both closed their eyes, held hands and prayed. Saying a Rosary, they prayed for Katie, they prayed for her family and they prayed for their own family. Faith filled their hearts as they pulled onto the interstate. Nikki and Adam wanted Katie to know how truly committed they were to maintaining an open adoption, and they discussed how they hoped to connect both families. They wanted Katie to know they would support her decision should she feel they were not the right fit or if she changed her mind about placing her child. Nikki and Adam wanted to share how wonderful their first open adoption with Michael was and that they hoped she would chose this child’s middle name.

It was a cool May morning, and Nikki and Adam had dressed comfortably in jeans. Nikki selected one of her favorite tops and Adam wore a checked button down. “What do you wear when you meet the possible mother of your unborn child?” thought Nikki. Knowing they were a down to earth family they had decided comfortable and casual was best. Still it was hard not knowing what was about to happen.

The miles flew by quickly and soon they were pulling into the parking lot of Adoption Associates a little early. They stopped to pray again and to take a few moments to calm their shaking hearts. Would today be the day that would forever change their lives?

Meanwhile, Katie was getting ready to leave work and drive to Adoption Associates. It was all she could do to focus on work that morning because she was trying her best not to freak out. She was excited but she was worried too. She wondered if they would like her and if she would like them. “What if they aren’t like their profile?” Katie thought. Trying to stay positive she thought of what she had planned for the meeting.

Earlier that week, Katie had decided to ask her best friend to go with her to this meeting for support and to help her with the surprise she was planning. Katie had thought that if she was ever to be a mom again she would do a “reveal shower”. It was the newest thing on Pinterest and what a fun idea for new parents! Although she was placing her child for adoption, she wanted to make this happen for her child’s parents. It would be her gift to them. So Katie had her sonogram sealed in an envelope and asked her friends to bake a cake and delivered it themselves to the adoption agency. When that cake was sliced it would show by color the sex of the baby.

When Katie first saw Nikki and Adam she was shaking so badly she started to cry. “They look just like their pictures!” she thought. Nikki felt immediately comfortable when she saw Katie and so their conversations came easy. Adam and Nikki shared their photo album and they all talked about their lives, their children and want they wanted for the future. It was like they were connected in a natural way.
Katie, who was sure she had made the right choice suggested they cut the cake. When Nikki handed her the knife, Katie gave it back to her and said, “You’re the mom!”. As both Nikki and Katie cut through the frosting together, the blue cake crumbled onto the plate and the room was filled with emotion. It was a boy! Katie asked Nikki and Adam what name they were choosing. She let them know it was their decision, and so they shared they had picked the name Shane, but hoped she would choose his middle name. Katie smiled and said she would think about it more and let them know.
They exchanged numbers, Facebooks, emails and made promises to talk tomorrow. Plans were made to meet in two days to spend the day with all the kids at the art fair. It was if they had always known each other, it felt almost surreal. Riding home Nikki and Adam could not stop talking and were overjoyed. Katie was so easy to talk to, they truly were blessed that she selected them. Katie was feeling free, like a weight had been lifted. She knew her choice and decision were right.

Tucking their little ones into bed that night, Nikki and Adam explained to them that they had been chosen by a birth mom and a baby boy would be entering their lives soon.
It was an amazing day that no one would ever forget. A choice that forged them together on their unselfish journey.