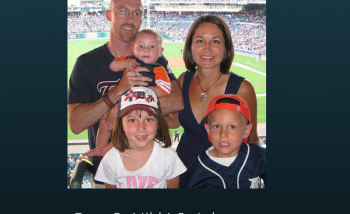 Nikki and Adam, Pieces of the Puzzle.

What an amazing day! thought Nikki as she started to fix dinner for her family. The fall weather was crisp and cool and after an inspirational Church service and visiting family, the children were playing outside “helping” Adam to rake leaves. Nikki felt a joyfulness fill her heart as she listened to their laughter echoing through the open window while she put the carry out pizza she had just picked up onto paper plates. She looked out smiling, watching Adam help Krista, age 8, bury Nate, age 6, in a pile of leaves. Right next to them was 9 month old Michael, crawling through the leaves, crumpling an occasional leaf up and sticking it in his mouth. It was a beautiful picture Nikki thought, we are truly blessed.

When Nikki met Adam during her sophomore year of college, they became inseparable. They knew they were friends and soul mates from the beginning and as time went by they began to plan their future together. Their future included a big family raised with Catholic family values. Nikki liked to remember ten years before when they had committed themselves before God as a married couple and how in following that journey their faith had only grown stronger.

One year into their marriage, Nikki became pregnant with Krista whose creative, determined and energetic personality brought them joy as parents. Two years after Krista was born, Nate came in the world, and with his huge heart and entertaining personality they all melded together as a loving team. To the world and their closest friends they were the ideal family. Nikki was a stay at home mom and Adam worked hard to provide for everyone. He relished his time during the evenings and weekends spent with his children and wife and Nikki enjoyed planning and organizing family adventures. They were an amazing team, committed to each other and their children.

When Nate was one year old, Nikki and Adam desired to have more children. Nikki and Adam attempted to conceive a child who they hoped would be their third child. After a few months with no success they began to test for infertility causes. Through prayer they also began to open their hearts to Adoption. Both Nikki and Adam asked God to help them build their family and that if he wanted them to adopt then God would need to find them a baby. They began their adoption process and became passionate about their ability to have an open adoption. Michael came through a fate filled connection and because of their openness to whatever God desired in all their lives. Michael’s adoption was their testimony in faith and the openness they have with his birth parents continues to be inspiring. Michael came into their life smiling and his joyful spirit kept them entertained everyday. Without doubt he was meant to be their son.

But on that Fall evening… as Nikki tucked her children into bed, reading each a story and stroking their hair, she knew that her family was her purpose in life. Although this gave her completeness, a puzzle piece was still missing from her beautiful picture. She did not feel empty or desperate, just calm and accepting. Nikki and Adam had discussed that they did not want Michael to be the only adopted child. They knew intuitively that adoption was the way God planned to grow their family and they were sure that he would guide them in this adoption process just as He had guided them with Michael’s.That was how adoption worked, Nikki thought. A true walk in faith.

The next day Nikki called Adoption Associates to start their paperwork for adopting again. She knew without a doubt that what she and Adam had to offer was an openness, and the acceptance a birth mother might need. Completely committed to moving ahead, they diligently

filled out their paperwork and once approved created an adoption family profile that reflected their family, their life and their conviction to an open adoption. They were sure it would take some time for a birth mother to find them, but they had faith….what else did they need?