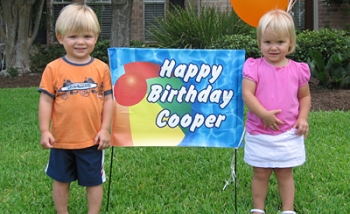 For Jane and Jim of Texas, the idea of adoption had never been a subject of daily conversation; with so many other tasks at hand, the time just never seemed right. When the couple was unable to conceive biologically, though, Jane began researching international and domestic adoption programs. Although Jim appeared less interested in the topic while Jane continued research, the tables turned quickly when Jim encountered friends from high school who had teenaged children themselves.

“That prompted him to say, ‘We really need to get going on this—let’s adopt!” says Jane.
In November 2006, the two began filling out paperwork.

With Jim being half Russian and holding a BA in Russian Language from the University of Texas, adopting from Russia was a natural decision for the couple. For other reasons, too, adopting internationally was the right choice for Jim and Jane.

“After some research on domestic adoption, we found it was too emotionally risky for us—we wanted a ‘sure thing,’” says Jane.
When their first agency’s accreditation expired, the two turned to Adoption Associates, Inc. in December 2007.
“It was the best thing we could have done,” says Jane. “AAI had just been reaccredited, and they were calling families, asking if anyone wanted to adopt from Russia.”

When asked what their ideal child(ren) would be, Jane and Jim knew exactly what they dreamed of: Siblings; both under age four; a boy and a girl; and both in good health. When Jane and Jim were referred children that fit their description to a “T,” the couple just couldn’t believe their good fortune.
“We didn’t expect it,” says Jane. “We got exactly what we had wanted.”
Before long, the two were boarding a plane to meet their future children.

With no idea of what to expect on their first trip, a consultant’s advice and AAI’s regional representative quickly made Jane and Jim feel at ease.
“Everything that our consultant told us to expect happened exactly to the sentence,” says Jane. “The regional representative, Dimitry, and his wife, Natasha, are such amazing people—they run all over town with several people relying on them and they don’t miss a beat.”
Once at the orphanage, the two saw their dreams come walking toward them.
“It was surreal to meet the children that we had already fallen in love with over the computer,” says Jane. “We were more sure than ever that we wanted to adopt them by the time we left.”

A little more than 10 months from the time their paperwork was completed, Jim and Jane were back in Russia a second time, ready to complete their adoption.
“Court went exactly as they said it would: Dimitry and the translator, Anna, prepared us well the day before,” says Jane.
Two days earlier than they were scheduled to return home, the new family headed for the U.S.

A New Life Together

Life at home didn’t adjust immediately; in fact, Jane says the first two weeks were chaotic at best. Jim and Jane’s pets—three dogs and two birds—added to the equation, too.
“We were all getting used to each other, and there were a lot of tears shed in a lot of ways,” says Jane. “But little by little, we adjusted. I knew it was coming; it just took some time.”

Both Jim’s and Jane’s family is spread out across the country, and in a effort to keep everyone informed, the two update a parenting blog with photos, stories and accomplishment posts.
“When we were in the waiting stages [of the adoption], it helped keep everyone up to date,” says Jane. “Now people can check the blog anytime they want.”
Not only does extended family benefit from the blog, but Jane and Jim do, too; fellow bloggers with young children have contacted Jim and Jane to set up playdates.
“We’re friends with people we never would have [been friends with] before,” says Jane.

The family’s blog is often filled with photos of the children splashing around in the pool, goofing off and enjoying life.

Their children, Cooper and Kara, recall very little about their home country, says Jane, as they were very young and spent most of their time in the orphanage. Still, Jim and Jane talk frequently with the children about the weather in Russia and their adoption experience there. In the future, they will celebrate the day they became a family—October 15—with everything Russian.
“Foods, books, maybe even costumes—we’ll make that Russia day,” says Jane.

When asked for advice for other couples considering international adoption, Jane recommends being flexible and realizing that no two adoptions are the same.
“Every one of us is different. Every child is in a different situation,” says Jane. “Be flexible and know that when the time is right, it will happen and all of the worrying, waiting, and paperwork will disappear into thin air. You won’t even remember it.”