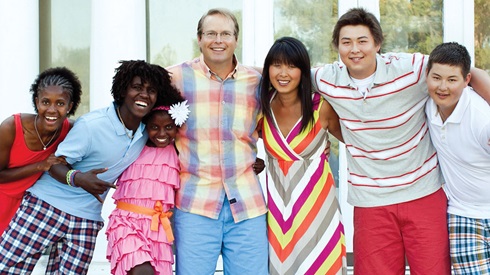 By Tara Bradford
Originally published by Focus On The Family

I remember the first time I saw others who looked like me.

My Scandinavian family walked into an Asian restaurant when I was 4 years old. Warm beige skin color, straight black hair, flat-bridged noses and almond-shaped eyes were not what I was used to looking back at me.

The women in the restaurant were friendly and kind — doting over me, in fact—but what should have been a feel-good moment was instead filled with confusion and fear as I hid behind my mom, not sure if they were going to take me from her.

How come they look like me but my parents don’t? I thought.

I was adopted from a South Korean orphanage at age 2, when I came to live with an American family in North Dakota. I spent many years struggling with my racial identity; I can remember wishing I looked like my white parents and my white friends.

What I wanted was a vanilla ice cream complexion, blond hair and double-eyelid eyes set between a thin, high-bridged nose. Instead, other children asked me why I didn’t look like my parents. Some expressed outright disbelief because my skin color and facial features didn’t match my mother or father. I endured racial slurs and watched the other kids stretch their eyes into slits.

The taunts were extremely hurtful; the comments and racial stereotyping created a sense of shame that I eventually internalized. The result? An unhealthy view of my own identity.

A national survey of adoptive parents by the U.S. Department of Health and Human Services found that 40 percent of adopted children are in “transracial adoptions” — that is, adoptions where parents are a different race or ethnicity from their adopted child.

When I was growing up, my parents never directly addressed the issue of my transracial adoption, nor did they empower me to be comfortable as a Korean daughter with Caucasian parents in a predominantly Caucasian community.

I can remember my mom saying to me, “It doesn’t matter what you look like; I love you the same.” Although her intentions were loving, her actions didn’t allow me to be recognized for all of me — inside and out. Truth is, it did matter that my appearance was different because those very differences affected how others treated me.

Few question a parent’s efforts to love his or her transracially adopted children, but it actually does those children harm when the parents fail to acknowledge their struggles or dismiss the obvious racial tension that they live with day in and day out. That’s why it’s vital for transracial adoptive parents to educate themselves on the stages of racial awareness that their children experience.

By age 3, children are already aware of racial differences and may have even discovered negative racial stereotypes. By the time they reach their teen years, they are well aware of racial identity and how they are perceived — and treated — by others in their community.

My parents adhered to what we describe today as a “colorblind” perspective. Being colorblind means you overlook or ignore a person’s racial differences in order to promote racial harmony. Today, we better understand that becoming a healthy transracial adoptive family requires that we intentionally live in color.

I learned this the hard way as a transracial adoptee, and I’m putting those lessons into practice as a transracial adoptive parent. In 2011, my husband and I expanded our family through the adoption of a sibling group from Ethiopia. With a Scandinavian husband, two biracial sons by birth and now three Ethiopian children (two girls and a boy), our family often confuses onlookers when we are in public.

Needless to say, I’m very proud of our multiracial family. I’ve learned to be confident in my identity, and — as a result — I better understand how to help my children develop their own healthy racial identity.

My Caucasian husband, meanwhile, has reflected on how his identity as part of the majority shaped his attitudes as a transracially adoptive father. He’s learned how to set aside his personal perceptions in order to better understand the experiences of his wife and children. He also acknowledges there are perspectives he can’t fully grasp, such as living under stereotypes as an Asian woman or a black teenage male. He recognizes that race and color do matter.

Steps to a healthy racial identity

For those who have adopted transracially, there is no shame or guilt in realizing there are things you need to change or begin doing. We can’t alter the past, but we can move forward — starting now — to help a child develop a healthy racial identity.

So, what steps can parents take to help their children? It begins with clearly communicating a sense of belonging and a sense of empathy for what they are experiencing. Validating a child’s feelings is vital — even when you don’t fully understand what he or she is going through.

Examine your racial awareness and biases as a parent. Recognize those areas where you may need to change. This may include a careful examination of your friends and social circles.

Affirm the similarities and celebrate the differences within your family. This helps build a sense of belonging and connectedness, while still acknowledging your uniqueness as individuals. The statement “I loved reading with my daddy at night, just like you love reading with your daddy, too” affirms a similar interest with your child. And the encouragement “You are such a fast runner! I bet you got that from someone in your birth family” celebrates your child’s differences in a way that acknowledges the importance of birth families.

Help your child connect positively within his or her racial group. Use books, movies, music or cultural events, just to name a few. Also consider your neighbors, church members, family friends and community professionals such as your child’s pediatrician, dentist or teachers. Is there an opportunity for your child to interact with role models who look like him or her? Intentionally placing racially similar people in your children’s daily life helps them feel good about and embrace who they are.

Be aware of micro-aggressions. These are brief, subtle and commonplace verbal, behavioral or environmental slights — intentional or not — that communicate racial offense. For example: Asking an individual of Asian descent, “No, where are you really from?” after she answers, “Washington.”

Empower your child with answers and coping skills when he or she encounters situations focused on racial identity. Helping your child practice with a script will equip him to respond to negative messages. A child who is told with a tone of disbelief, “That’s your mother?” can learn to reply: “Yes, that is my mom. I was adopted.”

Work together to find a Scripture verse that speaks to their heart. Help your children memorize verses such as Psalm 139:13-14 to remind them that it’s God who determines their value, not other people. Teach your children to replace the lies they hear with God’s truth.

Learning to embrace my identity in Christ greatly changed and healed the racial wounds I experienced as a child. Even with the best parenting strategies and armfuls of love, adoptive parents can’t completely protect their children from the cruelty in our world. As a result, it’s vital that we empower our kids to know they are precious individuals, valued members of a family and mercifully redeemed children of God.

Just as any decision to adopt should involve heartfelt prayer and a confident understanding of how God is asking you to grow your family, adopting transracially must also be specifically considered and prayed about. There is much at stake when embarking on the journey of adoption, but countless parents (like me) will confirm that it is worth any sacrifice. For example, I have logged many hours watching videos that taught me how to care for African hair and prepare Ethiopian food to honor my children’s racial heritage.

Transracial adoption is amazingly beautiful and frequently messy. It comes with a steep learning curve. Yet God has been gracious to give me what I needed for this journey, and He will do the same for you. 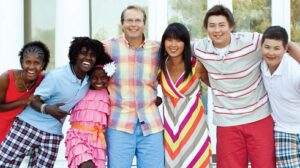